Ironfell is back!   It’s in beta at the moment, but will “soon” be released on the app store.  It’s built for iPhone, iPad and as a Mac Desktop app.  An Android version is in the works.

If you have an iPhone or iPad,  email me for a link to the beta. 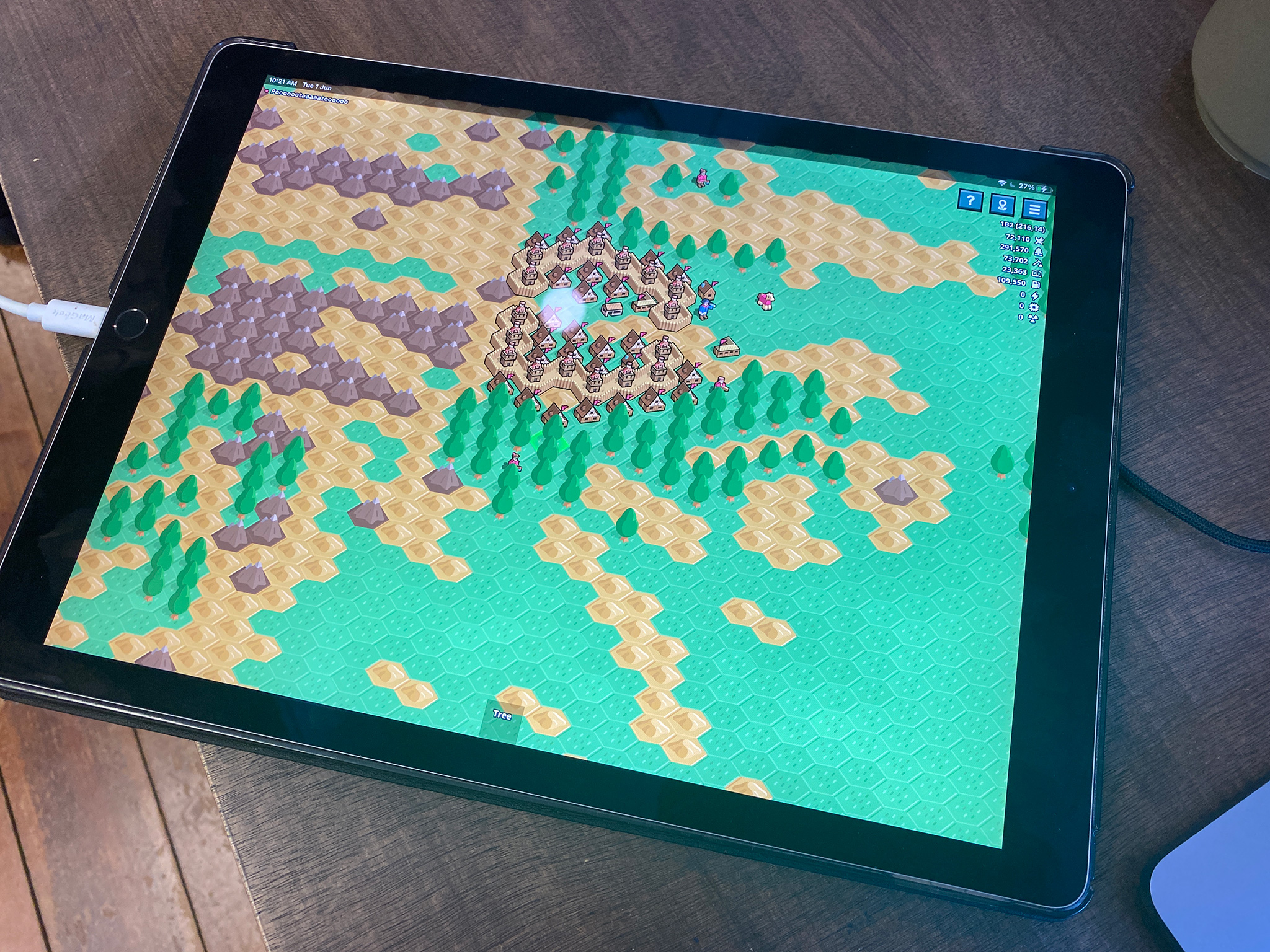 I recently dug out this old WebGL demo to show someone… I made it 6 years ago! WebGL is such an awesome technology that now works on pretty much all browsers and phones. I just wish there were more compelling uses for it. Ironfell was an indie hex-tile MMORTS where conflict happens massive persistent universe spanning all of time and space. With Ironfell I hoped to build a game that captured the same feeling as early Civilization and Ultima and be profitable enough to become my full time job. Ironfell was creatively a huge success, fun to play, people loved it. But financially it failed and was closed down in December 2014. 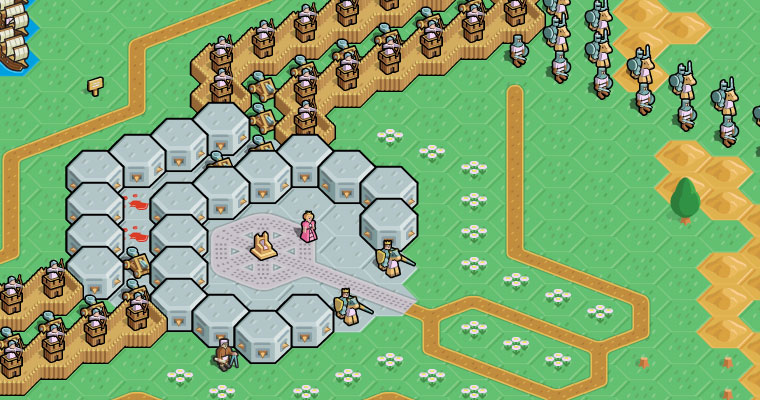 With any massive multiplayer game and the quality of the the community is critical. Early advertising targeted at role playing gamers (from stumbleupon) worked incredibly well for Ironfell. This meant that the core players were older and able to communicate well. Having a sociable and supportive community was the best thing about Ironfell. They made it fun for me to hang out in the game and talk to people. Months after the game was shut down players still send me emails like this:

“i miss ironfell soo much, especially the community :(“

The server’s behind Ironfell were four MacMini’s (quad-core i7, 16GB Ram, SSD) hosted at MacMiniColo. This was an unusual choice for servers, usually I’d use Amazon Cloud servers. Ironfell’s servers had high CPU and memory requirements, so being able to buy the server hardware up front and the fact that the servers were needed long term made the MacMini’s half as much as the Amazon cloud equivalent. Also developing on OSX and using OSX for the server operating system greatly simplified testing and deployment.

Ironfell’s lack of balance was a huge experiment (and risk). Ironfell did not have instanced or tiered battles, you always had all your resources available to fight with. So players who had been playing for a long time and players who payed for resources had an unfair advantage. Safe newbie areas and realms that only advanced players can use helped control the divide between the rich and poor. But most effective was having an end game plateau. Players reached a point where they had so much of every resource that resources stopped being important. Then allies, strategy and and skill became what mattered most.

Player quote: “I think I have enough resources to completely cover the islands in wood walls so nobody could move”

I’m a terrible illustrator, so getting Damon Keen to draw the character artwork worked incredibly well. What he came up with was absolutely perfect. It was retro cute and of such a high standard it made me proud to show people Ironfell. About one in a thousand players were complete assholes. Those few players were able to ruin the game for everyone else. One psychopath intentionally forced most of the long term players to quit Ironfell. When his account was deleted, he kept coming back with aliases and spent 14 hours a day 7 days a week trying to destroy Ironfell. I wasted almost 400 hours on this one person – that’s 10% of the total time spent on Ironfell! That time could definitely have been better spent improving Ironfell. I underestimated the amount of damage a single person could do to a community. Next time I would make dealing with the worst people a core part of the game design.

Marketing a game is a huge effort and it takes an enormous amount of time. Easily a third of the time I spent on Ironfell was marketing. And I don’t think I spent enough time on this. The most effective piece of press was on Rock Paper Shotgun from simply sending out a press release.

Financially Ironfell was a failure. It had $13,648 in income from selling in game resources but subtracting artwork, servers and advertising… Ironfell made a loss of about $8000. And that does not include my time.

During the 3 years I worked on Ironfell, I spent over 4000 hours on it. The dollar value of that time is absolutely horrifying. Unless I win the lottery I will never be able to spend that much time on a non-paying project ever again.

Ironfell was incredibly ambitious and I’m happy so much of it worked as well as it did. Financial reality means that Ironfell has been closed down, but hopefully I can take what I’ve learnt from Ironfell and make an even better game one day. So long and thanks for all the fish.

I started Ironfell in December 2011… 3 years ago… that is a long time.

Over 30,000 people have tried Ironfell and lots of those have become addicted to it.  It’s a fun game, I still like playing it.

The Alliance update has been live for 5 months now, and I think it’s helped Ironfell a lot.  People cooperate and in general the community is better because of it. Just over a thousand people have tried the Ironfell on iOS, which is pretty good.

Financially, Ironfell has not done very well.  It’s about $8,000 in the red.  The 4000+ hours I’ve spent on Ironfell is a hideous amount of unprofitable time. Creatively, I think Ironfell has been a success.  I can now say I’ve made a MMO :)  But it stopped being fun to work on a few months ago.

I can’t justify spending more time on a project I don’t enjoy, that doesn’t make a profit.

So…. on Monday the 15th of December, 10am New Zealand time, Ironfell will be shutdown.

p.s. Here is a little thank you poster for the people currently playing… names in no particular order :) Ironfell for iPad and iPhones is now live!

Ironfell is now live on the Apple app store.  Download it right now, for FREE!  :) Previously I said I would make a native version for iOS,  but both Adobe Air and iOS devices have become significantly faster in the past year.  Its performance is not as good as it would be as a native app.  On old devices it will be slow, but a one year old iPhone 5c is fast enough to play it.   So… it works… its free… and you can have it right now :)

I’ve tweaked the controls and made a few things fit better on small screens.  You can pinch-zoom at anytime to scale the interface to fit.

Just added the Vampire Maid.  She has auto-clean, to clean up those messy bloody splatters.  Useful for hiding the evidence of your treacherous attacks. Vampire Maids are made by upgrading a Queen next to a Tombstone.  She costs 2 million knowledge. So they are not cheap. There was a bug in Ironfell where players could re-use the same account reset link many times. This let people reset alt accounts many times without triggering the systems that are supposed to limit the number of times you reset. The bug is now fixed.

A handful of people used that bug to repeatedly reset alt accounts and transfer resources to their main account. The worst offender did that 187 times. These people have had their accounts disabled for 14 days.

If you find bugs, especially ones that can be used to get free resources, please let me know. I give generous rewards for finding bugs like this one. The person who told me about it just received 250k of Oil. Phishing is when someone tricks you into giving up sensitive information such as usernames or passwords usually by creating a website to impersonate a trusted website.

Phishing is pronounced the same as fishing. I’ve blacked out the the URL for this page, because people will still be silly enough to use it.

This is an extremely obvious example of someone Phishing for account details.

Several Ironfell players have fallen for this trap and he has used their account details to sign into Ironfell.

Here is a excerpt from the Ironfell chat log files where he tries to convince someone to use that page.

If you are curious about what his special map looks like, below is a screenshot that a user sent me: A bit of common sense will keep you safe from phishing.  Be aware of where links are actually taking you. Use a different password for everything.  And think carefully before you enter a password into a new site.

And don’t trust anything James “falazar” Ratcliff tells you :)

And here is James’s reply to the above posting, which he posted on his tlk.io chatroom. If you just want to play the game, and don’t want to trash talk, you will love this feature.

I’ve just added a Mute Someone button to the top left menu.   You can add as many people as you like to the Mute List,  and you simply won’t see what they say in any of the chat windows. Also made the Alliance Info panel taller and made the enter key submit some text fields.